The client inserts data by calling the insert API, and the amount of inserted data cannot exceed 256 MB at a time. The process of data insertion is as follows: 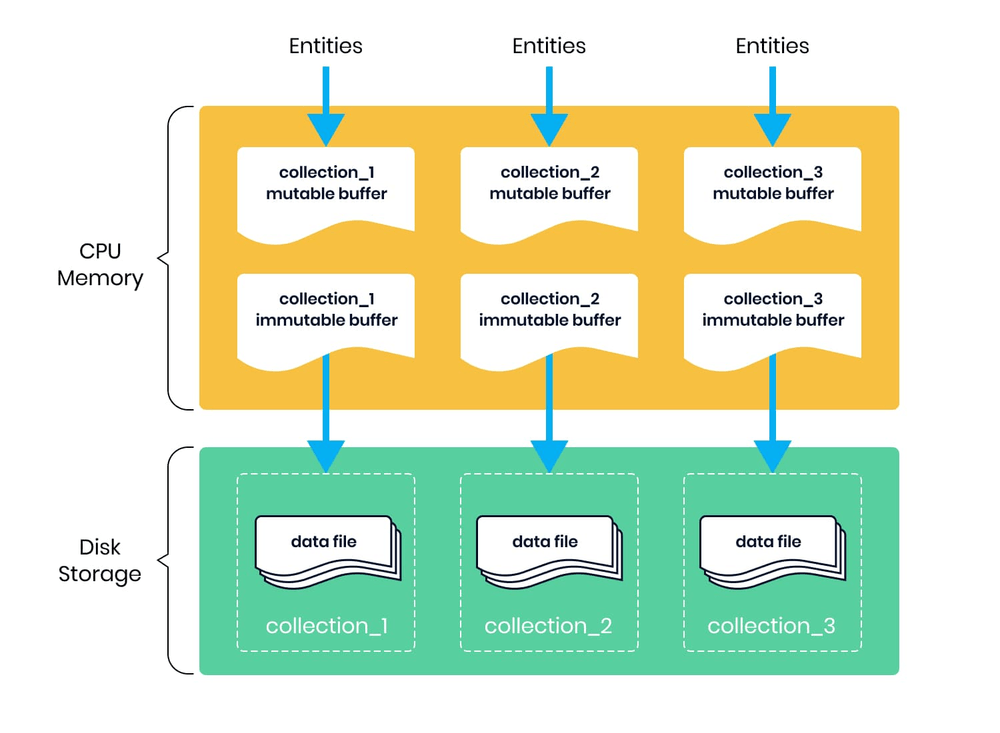 There are three triggering mechanisms for data flushing in the buffer:

The system triggers the data flushing task regularly. The interval is determined by the auto_flush_interval (by default 1 second).

The process of data flushing is as follows:

After completing the above process, the system has successfully created a segment.

The client calls the flush API to trigger the data flushing task.

Trigger when the buffer reaches the upper limit

When the accumulated data reaches the upper limit of the mutable buffer (128MB), the data flushing task is triggered.

All relevant files of each segment are stored in a folder named by the segment ID, such as a UID file that records the entity ID, a delete_docs file used to mark deleted entities, and a bloom-filter file used for quick entity search.

Please see the diagram in Partition and Segment for data files within the segment.

The timings to trigger the merge task are as follows:

The indexed segments do not participate in the merge task.

Before building indexes, Milvus performs query operations on collections by brute-force search. To improve query performance, you can build a suitable index for the collection. After the index is built, Milvus generates an index file for each segment and simultaneously updates the metadata.

Milvus created a delete_docs file for each segment to record the position of the vectors to be deleted within the segment.

Milvus uses a bloom filter to quickly determine whether an entity ID exists in a segment. Therefore, a file named bloom_filter is created under each segment.

The process of deleting an entity is as follows:

When querying a segment, Milvus reads the entity data of the segment and the delete_docs file into memory. Although the deleted entities do not participate in the calculation, they are read into memory. Therefore, the more deleted entities in a segment, the more memory resources and disk space are wasted. To reduce such unnecessary resource consumption, Milvus provides data segment compaction operation, the process is as follows:

The compact operation ignores the segment where the deleted vector accounts for less than 10% of the entire data.

Floating-point vectors are stored in Milvus as single-precision (float) data.