Use in-memory replicas to enhance read throughput and the utilization of hardware resources.

This article is co-authored by Congqi Xia and Angela Ni.

With its official release, Milvus 2.1 comes with many new features to provide convenience and a better user experience. Though the concept of in-memory replica is nothing new to the world of distributed databases, it is a critical feature that can help you boost system performance and enhance system availability in an effortless way. Therefore, this post sets out to explain what in-memory replica is and why it is important, and then introduces how to enable this new feature in Milvus, a vector database for AI.

Before getting to know what in-memory replica is and why it is important, we need to first understand a few relevant concepts including replica group, shard replica, streaming replica, historical replica, and shard leader. The image below is an illustration of these concepts. 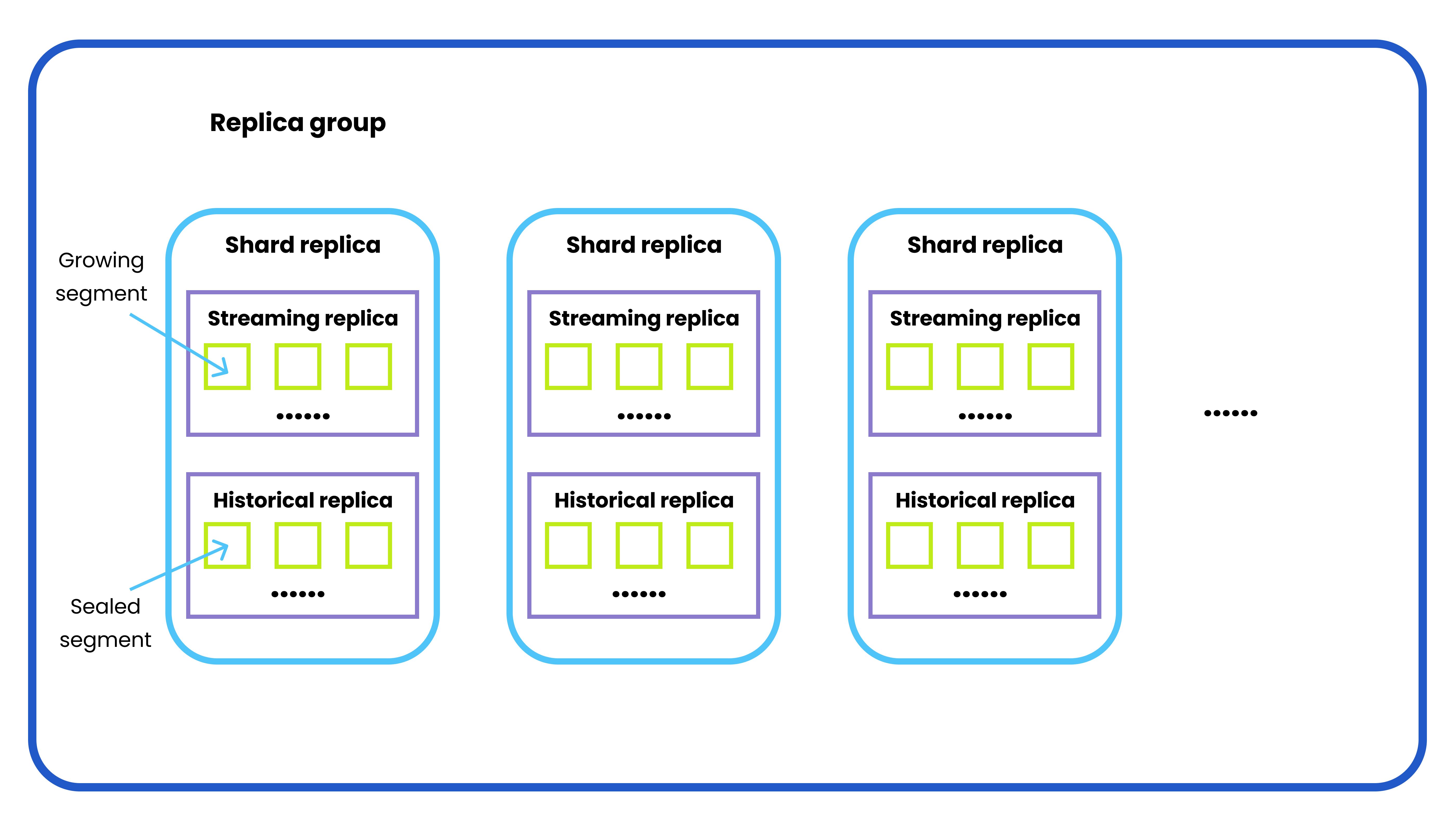 A replica group consists of multiple query nodes that are responsible for handling historical data and replicas.

A shard leader is the query node serving the streaming replica in a shard replica.

What is in-memory replica?

Enabling in-memory replicas allows you to load data in a collection on multiple query nodes so that you can leverage extra CPU and memory resources. This feature is very useful if you have a relatively small dataset but want to increase read throughput and enhance the utilization of hardware resources.

The Milvus vector database holds one replica for each segment in memory for now. However, with in-memory replicas, you can have multiple replications of a segment on different query nodes. This means if one query node is conducting a search on a segment, an incoming new search request can be assigned to another idle query node as this query node has a replication of exactly the same segment.

In addition, if we have multiple in-memory replicas, we can better cope with the situation in which a query node crashes. Before, we have to wait for the segment to be reloaded in order to continue and search on another query node. However, with in-memory replication, the search request can be resent to a new query node immediately without having to reload the data again.

Why are in-memory replicas important?

One of the most significant benefits of enabling in-memory replicas is the increase in overall QPS (query per second) and throughput. Furthermore, multiple segment replicas can be maintained and the system is more resilient in the face of a failover.

Enabling the new feature of in-memory replicas is effortless in the Milvus vector database. All you need to do is simply specify the number of replicas you want when loading a collection (ie. calling collection.load()).

In the following example tutorial, we suppose you have already created a collection named "book" and inserted data into it. Then you can run the following command to create two replicas when loading a book collection.

You can also check the information of the in-memory replicas you created by running collection.get_replicas(). The information of replica groups and the corresponding query nodes and shards will be returned. The following is an example of the output.

With the official release of Milvus 2.1, we have prepared a series of blogs introducing the new features. Read more in this blog series: