How to set nlist and nprobe for IVF indexes?

Setting nlist is scenario-specific. As a rule of thumb, the recommended value of nlist is 4 × sqrt(n), where n is the total number of entities in a segment.

Setting nprobe is specific to the dataset and scenario, and involves a trade-off between accuracy and query performance. We recommend finding the ideal value through repeated experimentation.

The following charts are results from a test running on the sift50m dataset and IVF_SQ8 index, which compares recall and query performance of different nlist/nprobe pairs. 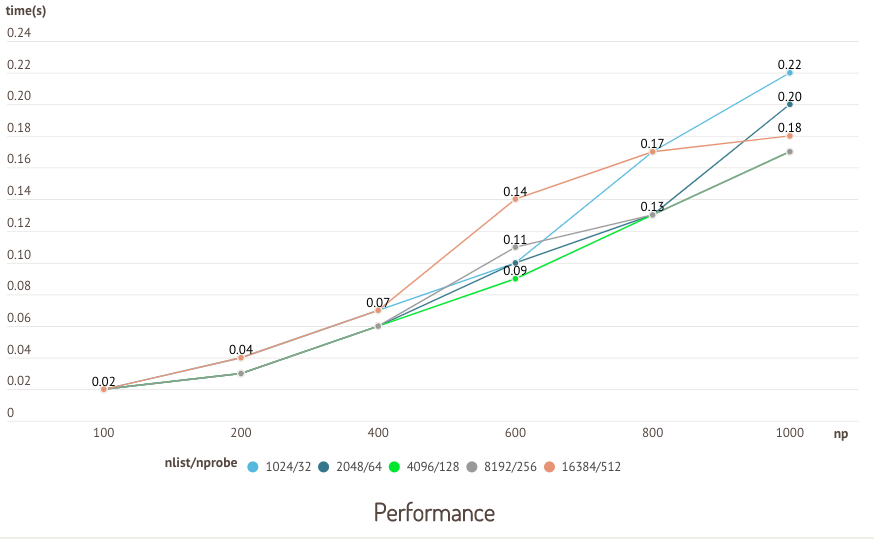 Why do queries sometimes take longer on smaller datasets?

Query operations are conducted on segments. indexes reduce the amount of time it takes to query a segment. If a segment has not been indexed, Milvus resorts to brute-force search on the raw data—drastically increasing query time.

Therefore, it usually takes longer to query on a small dataset (collection) because it has not built index. This is because the sizes of its segments have not reached the index-building threshold set by rootCoord.minSegmentSizeToEnableindex. Call create_index() to force Milvus to index segments that have reached the threshold but not yet been automatically indexed, significantly improving query performance.

CPU usage increases when Milvus is building indexes or running queries. In general, index building is CPU intensive except when using Annoy, which runs on a single thread.

Insert operations are not CPU intensive. However, because new segments may not have reached the threshold for index building, Milvus resorts to brute-force search—significantly impacting query performance.

The rootcoord.minSegmentSizeToEnableIndex parameter determines the index-building threshold for a segment, and is set to 1024 rows by default. See System Configurations for more information.