How data management is done in Milvus

First of all, some basic concepts of Milvus:

Assume we have 100 million 512-dimensional vectors, and need to insert and manage them in Milvus for efficient vector search.

Let’s take a look at how vectors are inserted into Milvus. 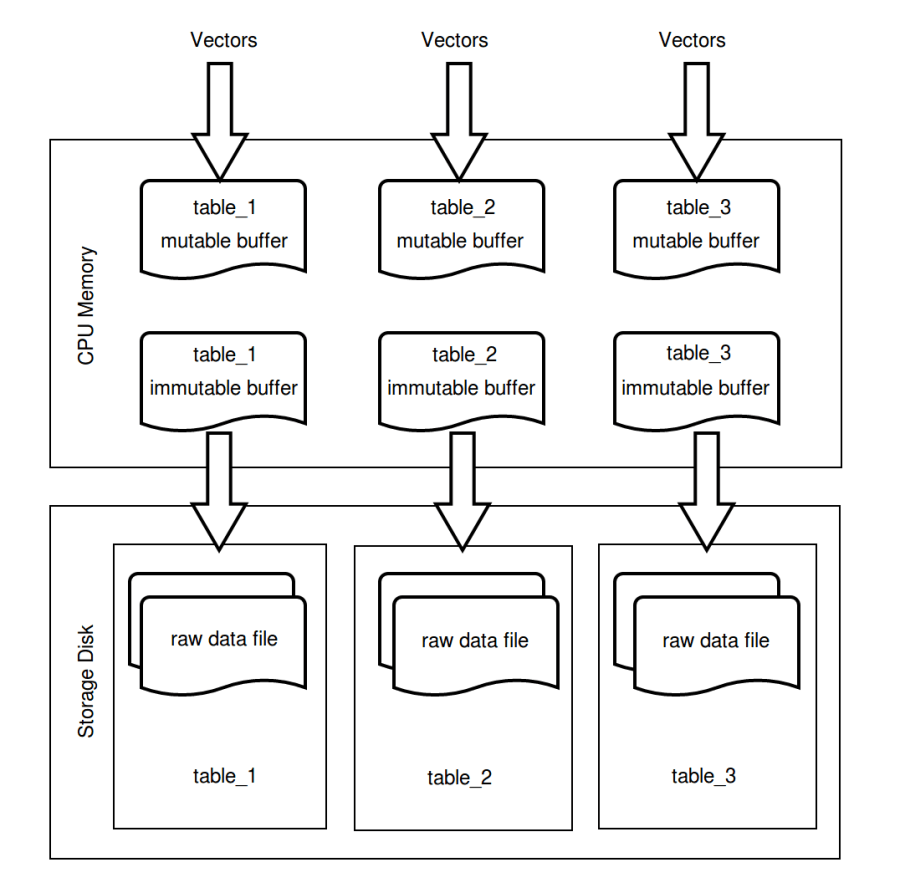 Not every vector insertion is loaded into disk. Milvus reserves a mutable buffer in the CPU memory for every table that is created, where inserted data can be quickly written to. And as the data in the mutable buffer reaches a certain size, this space will be labeled as immutable. In the mean time, a new mutable buffer will be reserved. Data in immutable buffer are written to disk regularly and corresponding CPU memory is freed up. The regular writing to disk mechanism is similar to the one used in Elasticsearch, which writes buffered data to disk every 1 second. In addition, users that are familiar with LevelDB/RocksDB can see some resemblance to MemTable here.

The goals of the Data Insert mechanism are:

When vectors are written to disk, they are saved in Raw Data File containing the raw vectors. As mentioned before, massive-scale vectors need to be saved and managed in multiple data files. Inserted data size varies as users can insert 10 vectors, or 1 million vectors at one time. However, the operation of writing to disk is executed once every 1 second. Thus data files of different sizes are generated.

Fragmented data files are neither convenient to manage nor easy to access for vector search. Milvus constantly merges these small data files until the merged file size reaches a particular size, for example, 1GB. This particular size can be configured in the API parameter index_file_size in table creation. Therefore, 100 million 512-dimensional vectors will be distributed and saved in about 200 data files.

In consideration to incremental computation scenarios, where vectors are inserted and searched concurrently, we need to make sure that once vectors are written to disk, they are available for search. Thus, before the small data files are merged, they can be accessed and searched. Once the merge is completed, the small data files will be removed, and newly merged files will be used for search instead.

This is how queried files look before the merge:

Queried files after the merge:

The search based on Raw Data File is brute-force search which compares the distances between query vectors and origin vectors, and computes the nearest k vectors. Brute-force search is inefficient. Search efficiency can be greatly increased if the search is based on Index File where vectors are indexed. Building index requires additional disk space and is usually time-consuming.

So what are the differences between Raw Data Files and Index Files? To put it simple, Raw Data File records every single vector together with their unique ID while Index File records vector clustering results such as index type, cluster centroids, and vectors in each cluster. 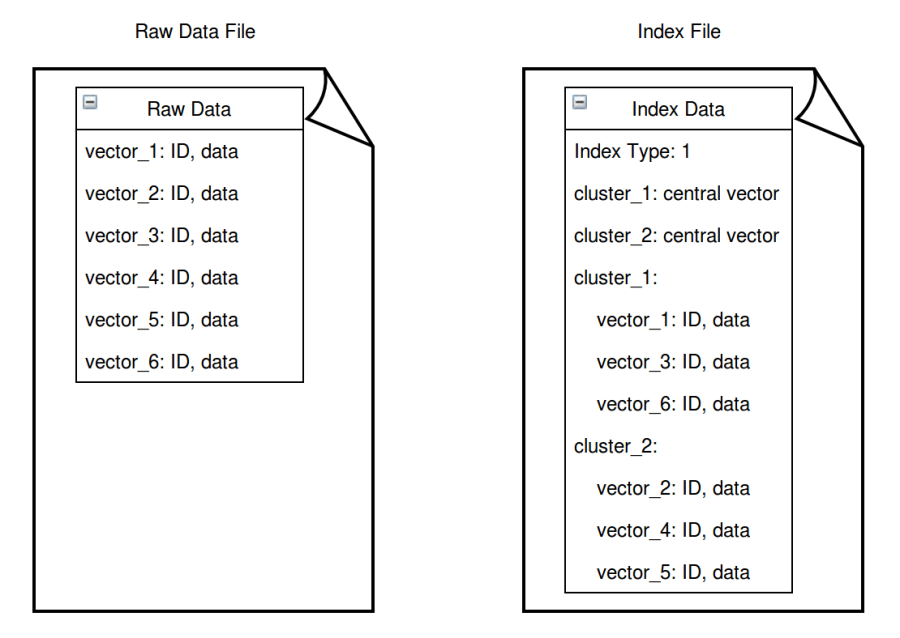 Generally speaking, Index File contains more information than Raw Data File, yet the file sizes are much smaller as vectors are simplified and quantized during the index building process (for certain index types).

Newly created tables are by default searched by brute-computation. Once the index is created in the system, Milvus will automatically build index for merged files that reach the size of 1 GB in a standalone thread. When the index building is completed, a new Index File is generated. The raw data files will be archived for index building based on other index types.

Index will not be automatically built for raw data files that do not reach 1 GB, which may slow down the search speed. To avoid this situation, you need to manually force build index for this table.

After index is force built for the file, the search performance is greatly enhanced.

As mentioned earlier, 100 million 512-dimensional vectors are saved in 200 disk files. When index is built for these vectors, there would be 200 additional index files, which makes the total number of files to 400 (including both disk files and index files). An efficient mechanism is required to manage the meta data (file statuses and other information) of these files in order to check the file statuses, remove or create files. 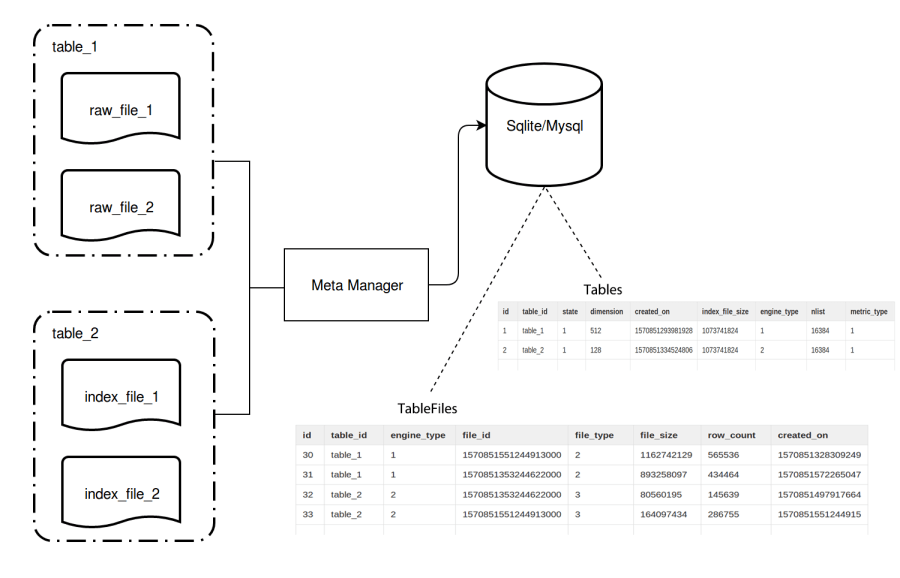 With these meta data, various operations can be executed. The following are some examples:

Below chart demonstrates the vector search process in both CPU and GPU by querying files (raw data files and index files) which are copied and saved in disk, CPU memory and GPU memory for the topk most similar vectors. 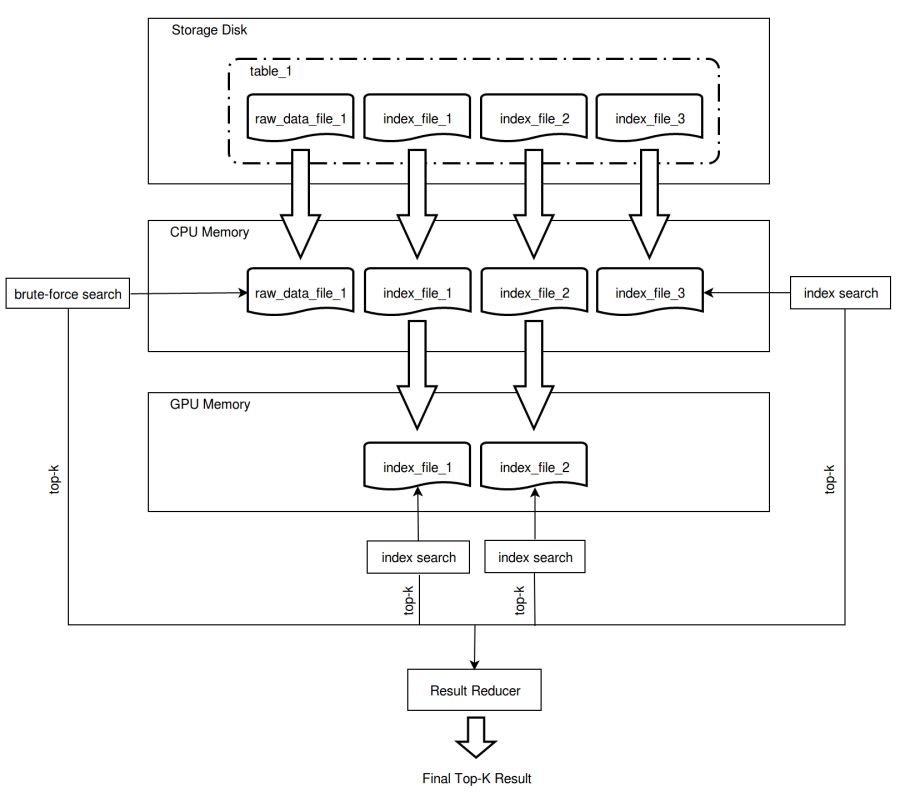 Query scheduling algorithm significantly improves system performance. The basic design philosophy is to achieve the best search performance through maximum utilization of hardware resources. Below is just a brief description of query scheduler and there will be a dedicated article about this topic in the future.

We call the first query against a given table the ‘cold’ query, and subsequent queries the ‘warm’ query. When the first query is made against a given table, Milvus does a lot of work to load data into CPU memory, and some data into GPU memory, which is time-consuming. In further queries, the search is much faster as partial or all the data are already in CPU memory which saves the time to read from the disk.

To shorten the search time of the first query, Milvus provides Preload Table (preload_table) configuration which enables automatic pre-loading of tables into CPU memory upon server start-up. For a table containing 100 million 512-dimensional vectors, which is 200 GB, the search speed is the fastest if there's enough CPU memory to store all these data. However, if the table contains billion-scale vectors, it is sometimes inevitable to free up CPU/GPU memory to add new data that are not queried. Currently, we use LRU (Latest Recently Used) as the data replacement strategy.

As shown in below chart, assume there is a table that has 6 index files stored on the disk. The CPU memory can only store 3 index files, and GPU memory only 1 index file.

Query scheduler mainly handles 2 sets of task queues, one queue is about data loading and another is about search execution. 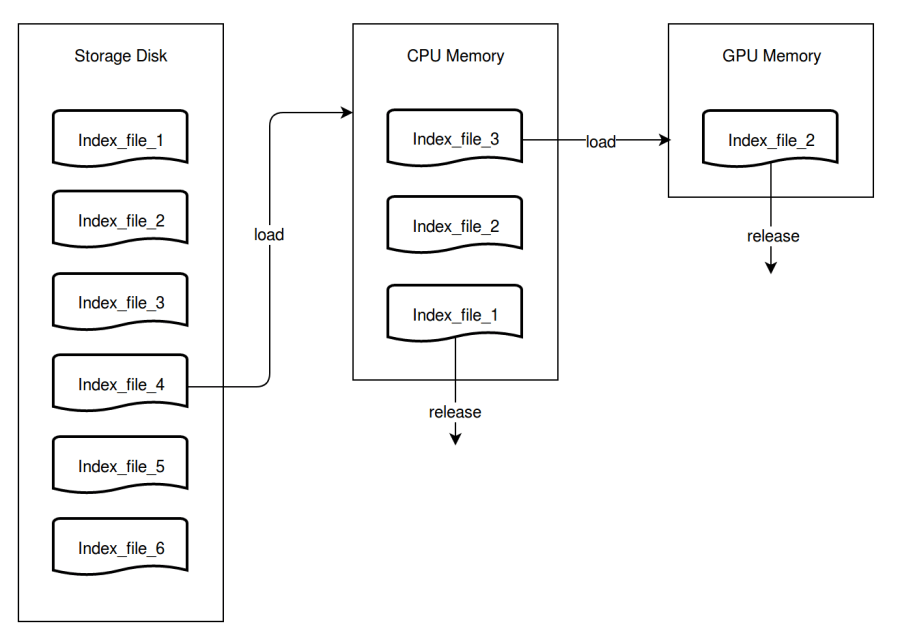 There are 2 key parameters related to vector search: one is ’n’ which means n number of target vectors; another is ‘k’ meaning the top k most similar vectors. The search results are actually n sets of KVP (key-value pairs), each having k pairs of key-value. As queries need to be executed against each individual file, no matter it is raw data file or index file, n sets of top-k result sets will be retrieved for each file. All these result sets are merged to get the top-k result sets of the table. 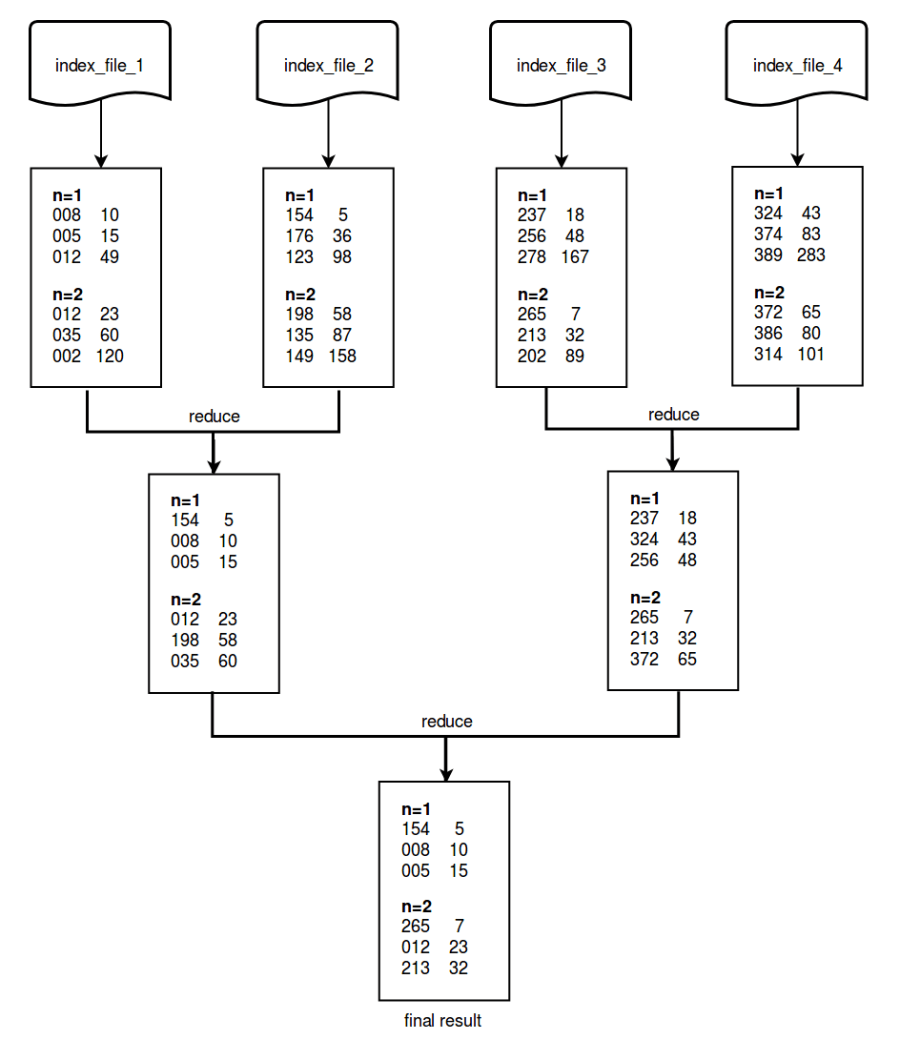 The following are some thoughts on possible optimizations of data management.