How Does Milvus Schedule Query Tasks

The work behind the scene

n this article, we will discuss how Milvus schedules query tasks. We will also talk about problems, solutions, and future orientations for implementing Milvus scheduling.

We know from Managing Data in Massive-Scale Vector Search Engine that vector similarity search is implemented by the distance between two vectors in high-dimensional space. The goal of vector search is to find K vectors that are closest to the target vector.

There are many ways to measure vector distance, such as Euclidean distance:

where x and y are two vectors. n is the dimension of the vectors.

In order to find K nearest vectors in a dataset, Euclidean distance needs to be computed between the target vector and all vectors in the dataset to be searched. Then, vectors are sorted by distance to acquire K nearest vectors. The computational work is in direct proportion to the size of the dataset. The larger the dataset, the more computational work a query requires. A GPU, specialized for graph processing, happens to have a lot of cores to provide the required computing power. Thus, multi-GPU support is also taken into consideration during Milvus implementation.

Each Resource has a task array, which records tasks belonging to the Resource. Each task has different states, including Start, Loading, Loaded, Executing, and Executed. The Loader and Executor in a computing device share the same task queue. 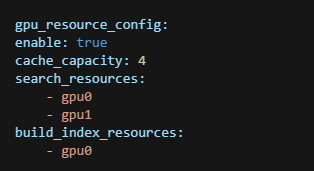 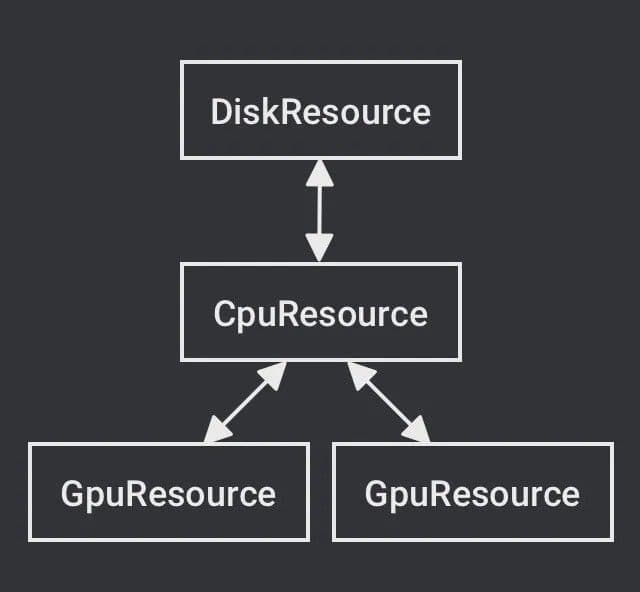 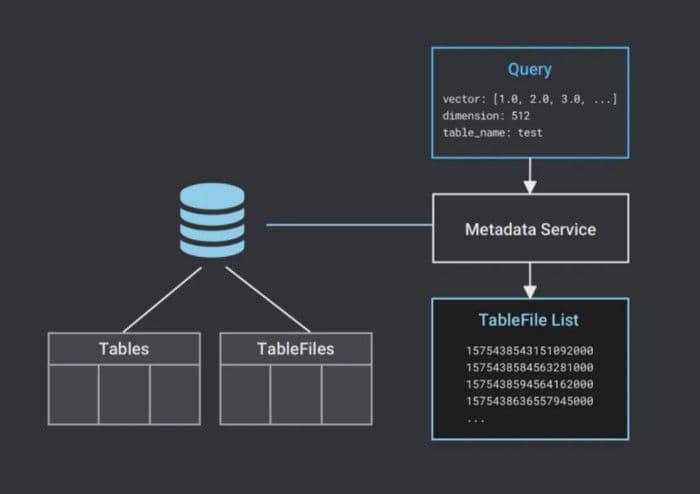 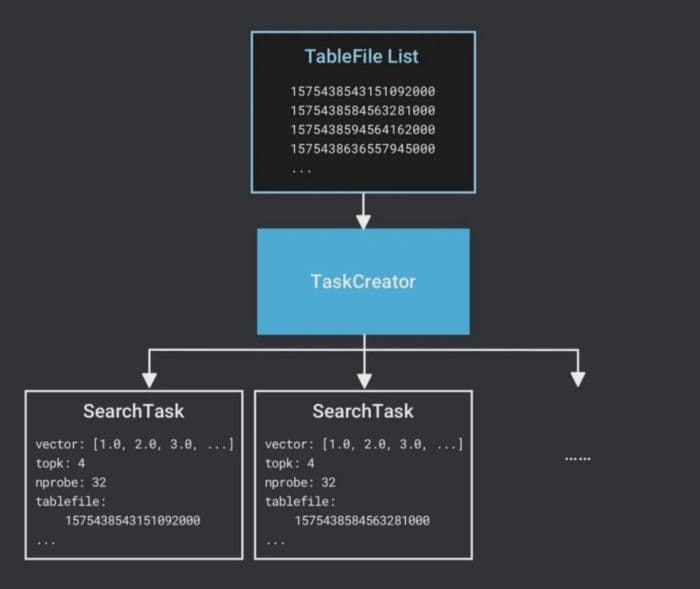 Here we assume that the estimated completion time for GPU1 is shorter. 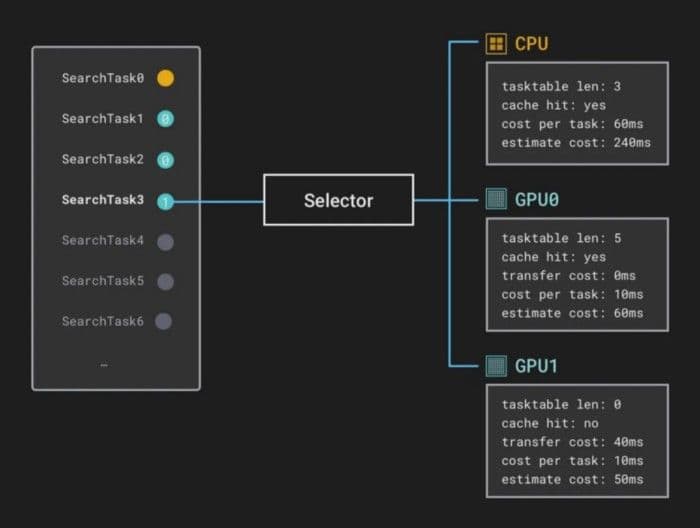 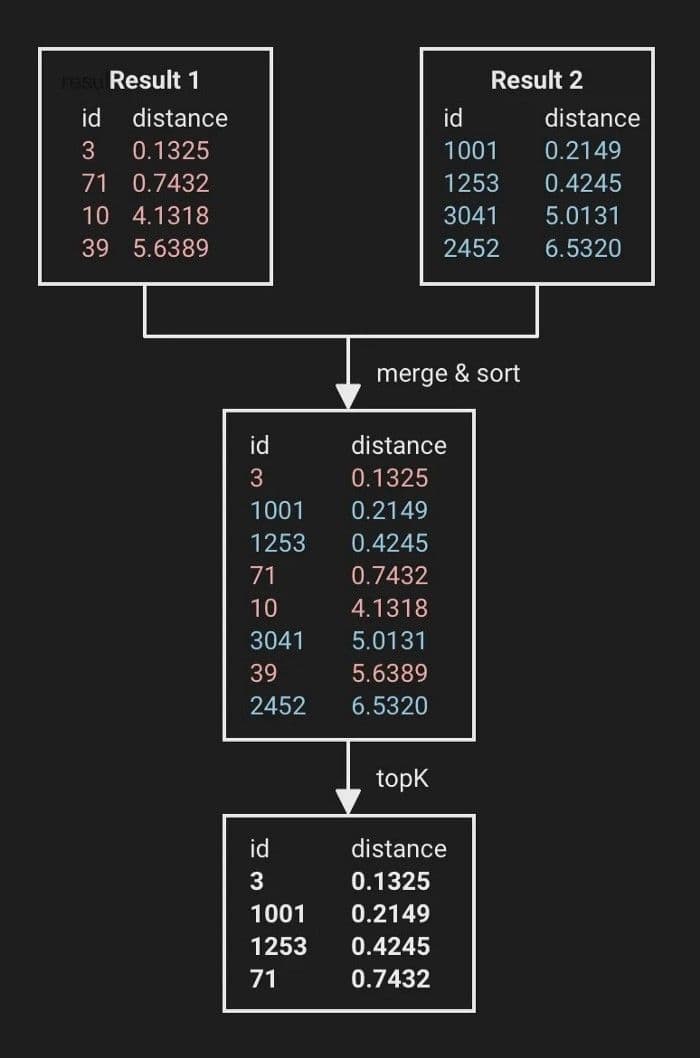 After all SearchTasks are complete, Milvus returns the whole search result to the client.

Index building is basically the same as the search process without the merging process. We will not talk about this in detail.

As mentioned before, data blocks need to be loaded to corresponding storage devices such as CPU memory or GPU memory before computation. To avoid repetitive data loading, Milvus introduces LRU (Least Recently Used) cache. When the cache is full, new data blocks push away old data blocks. You can customize the cache size by the configuration file based on the current memory size. A large cache to store search data is recommended to effectively save data loading time and improve search performance.

The cache cannot satisfy our needs for better search performance. Data needs to be reloaded when memory is insufficient or the size of the dataset is too large. We need to decrease the effect of data loading on search performance. Data loading, whether it be from disk to CPU memory or from CPU memory to GPU memory, belongs to IO operations and barely needs any computational work from processors. So, we consider performing data loading and computation in parallel for better resource usage. 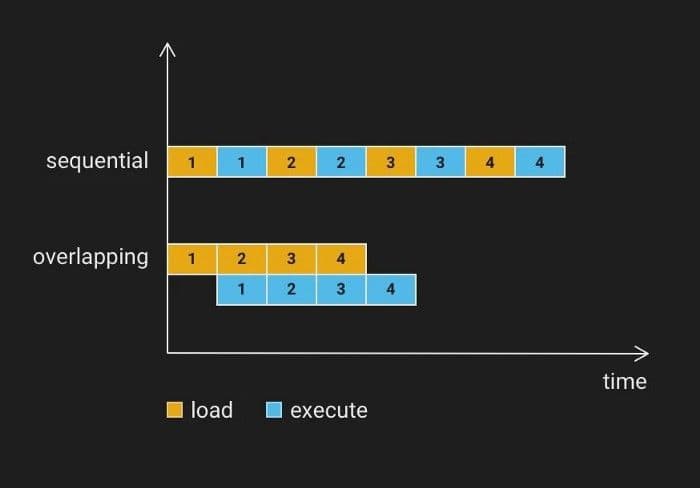 Previously, Milvus uses the Round Robin strategy for multi-GPU task scheduling. This strategy worked perfectly in our 4-GPU server and the search performance was 4 times better. However, for our 2-GPU hosts, the performance was not 2 times better. We did some experiments and discovered that the data copy speed for a GPU was 11 GB/s. However, for another GPU, it was 3 GB/s. After referring to the mainboard documentation, we confirmed that the mainboard was connected to one GPU via PCIe x16 and another GPU via PCIe x4. That is to say, these GPUs have different copy speeds. Later, we added copy time to measure the optimal device for each SearchTask.

During experimentation, we discovered some opportunities for performance improvement. For example, when the server receives multiple queries for the same table, the queries can be merged under some conditions. By using data locality, we can improve the performance. These optimizations will be implemented in our future development. Now we already know how queries are scheduled and performed for the single-host, multi-GPU scenario. We will continue to introduce more inner mechanisms for Milvus in the upcoming articles.