How to scale out

Milvus aims to achieve efficient similarity search and analytics for massive-scale vectors. A standalone Milvus instance can easily handle vector search for billion-scale vectors. However, for 10 billion, 100 billion or even larger datasets, a Milvus cluster is needed. The cluster can be used as a standalone instance for upper-level applications and can meet the business needs of low latency, high concurrency for massive-scale data. A Milvus cluster can resend requests, separate reading from writing, scale horizontally, and expand dynamically, thus providing a Milvus instance that can expand without limit. Mishards is a distributed solution for Milvus.

This article will briefly introduce components of the Mishards architecture. More detailed information will be introduced in the upcoming articles. 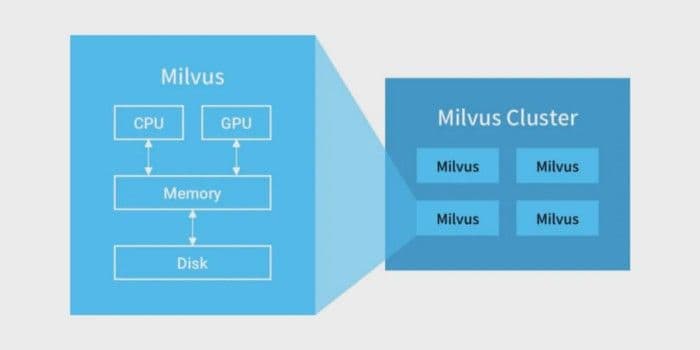 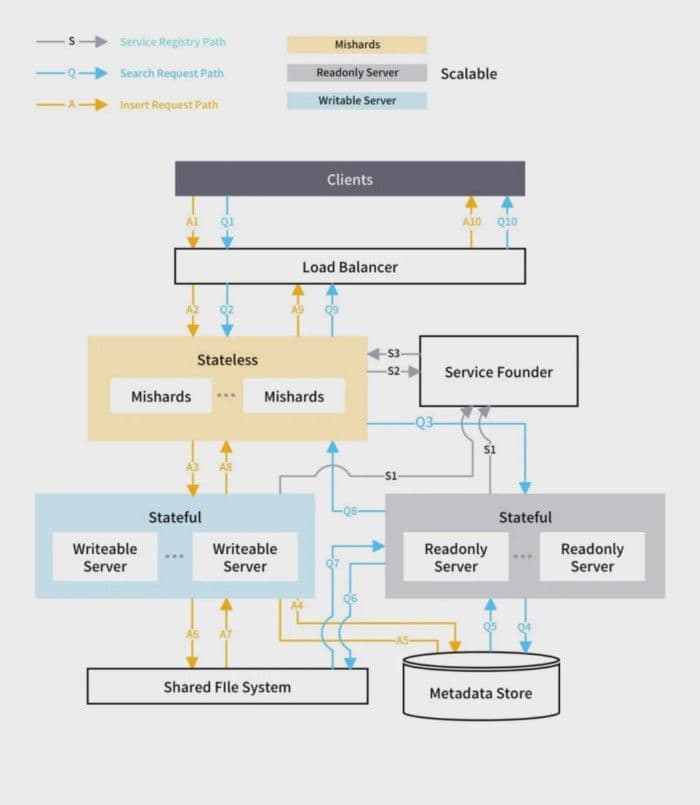 Mishards is responsible for breaking up upstream requests and routing sub-requests to sub-services. The results are summarized to return to upstream. 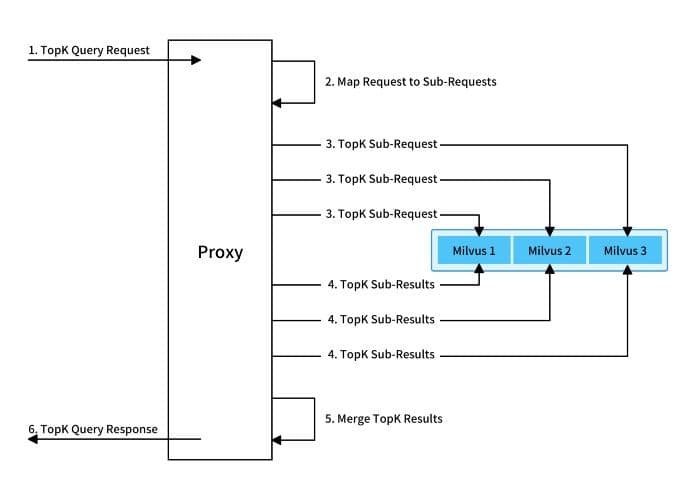 Because Mishards is a stateless service, it does not save data or participate in complex computation. Thus, nodes do not have high configuration requirements and the computing power is mainly used in merging sub-results. So, it is possible to increase the number of Mishards nodes for high concurrency.

Milvus nodes are responsible for CRUD related core operations, so they have relatively high configuration requirements. Firstly, the memory size should be large enough to avoid too many disk IO operations. Secondly, CPU configurations can also affect performance. As the cluster size increases, more Milvus nodes are required to increase system throughput.

Only one writable node is allowed

When the data size is extremely large, or the latency requirement is extremely high, you can horizontally scale read-only nodes as stateful nodes. Assume there are 4 hosts and each has the following configuration: CPU Cores: 16, GPU: 1, Memory: 64 GB. The following chart shows the cluster when horizontally scaling stateful nodes. Both computing power and memory scale linearly. The data is split into 8 shards with each node processing requests from 2 shards. 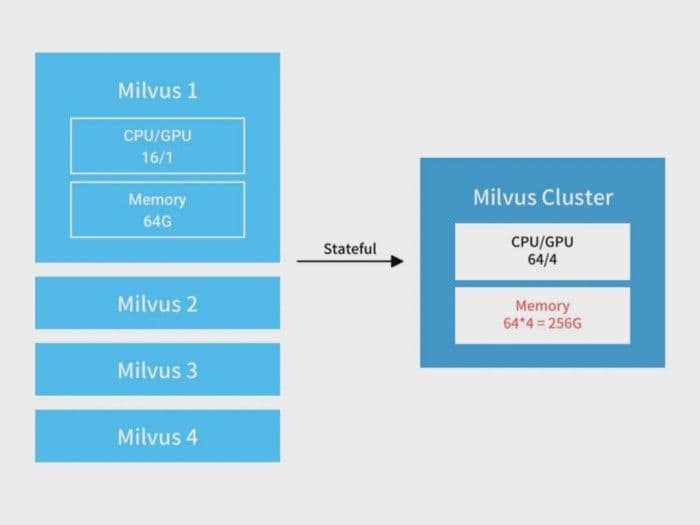 When the number of requests is large for some shards, stateless read-only nodes can be deployed for these shards to increase throughput. Take the hosts above as an example. when the hosts are combined into a serverless cluster, the computing power increases linearly. Because the data to process does not increase, the processing power for the same data shard also increases linearly. 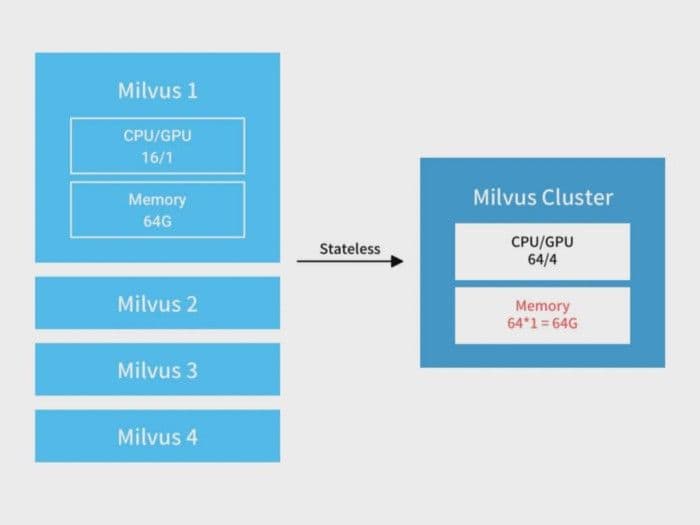 Service discovery contains a lot of frameworks, including etcd, Consul, ZooKeeper, etc. Mishards defines the service discovery interfaces and provides possibilities for scaling by plugins. Currently, Mishards provides two kinds of plugins, which correspond to Kubernetes cluster and static configurations. You can customize your own service discovery by following the implementation of these plugins. The interfaces are temporary and need a redesign. More information about writing your own plugin will be elaborated in the upcoming articles. 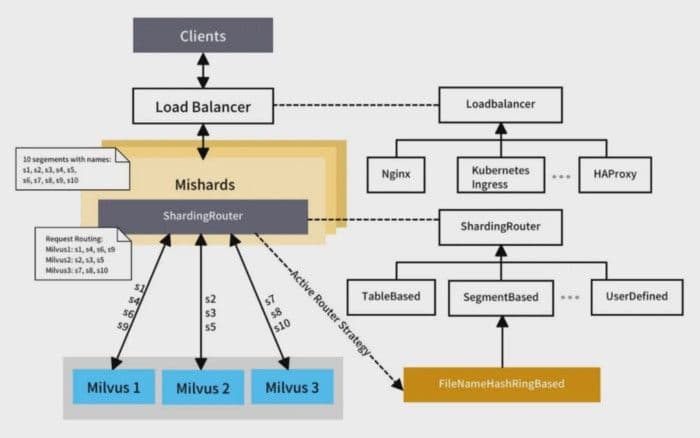 Service discovery and load balancing are used together. Load balancing can be configured as polling, hashing, or consistent hashing.

The load balancer is responsible for resending user requests to the Mishards node.

Each Mishards node acquires the information of all downstream Milvus nodes via the service discovery center. All related metadata can be acquired by metadata service. Mishards implements sharding by consuming these resources. Mishards defines the interfaces related to routing strategies and provides extensions via plugins. Currently, Mishards provides a consistent hashing strategy based on the lowest segment level. As is shown in the chart, there are 10 segments, s1 to s10. Per the segment-based consistent hashing strategy, Mishards routes requests concerning s1, 24, s6, and s9 to the Milvus 1 node, s2, s3, s5 to the Milvus 2 node, and s7, s8, s10 to the Milvus 3 node.

Based on your business needs, you can customize routing by following the default consistent hashing routing plugin.

Given the complexity of a distributed system, requests are sent to multiple internal service invocations. To help pinpoint problems, we need to trace the internal service invocation chain. As the complexity increases, the benefits of an available tracing system are self-explanatory. We choose the CNCF OpenTracing standard. OpenTracing provides platform-independent, vendor-independent APIs for developers to conveniently implement a tracing system. 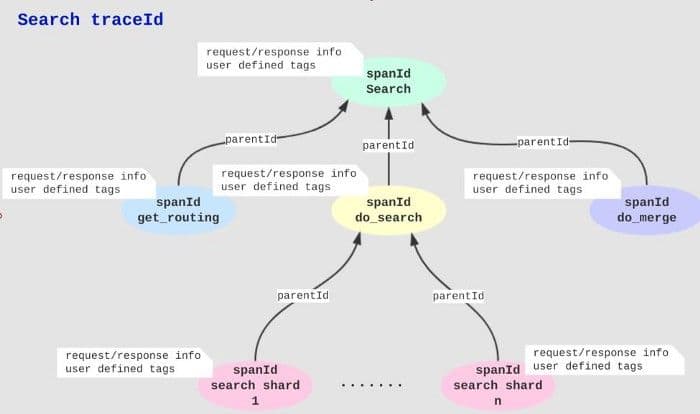 The following chart shows examples of request/response info and tags of each node:

OpenTracing has been integrated to Milvus. More information will be covered in the upcoming articles.

-Deployment is complicated when there are multiple shards and a single shard has multiple copies.

We will fix these know issues in the upcoming versions so that Mishards can be applied to the production environment more conveniently.